The powerful Gods, monsters and myths of Ancient Greek legends give this feature-filled and immensely popular online Slot a truly epic setting.

The mighty forces of Zeus, Athena, Poseidon and Hercules all make appearances on the reels of this Slot to guide us mortals along the path of our own fates and fortunes, while one other titanic figure – that of the ever-growing Progressive Jackpot – looms over every spin of the reels.

You've heard the names of this ancient Gods before, but now you can come face-to-face with the powerful deities of history's most infamous pantheon. Your destiny sites in the lap of the Gods as you take a voyage into the unknown, attempting to conquer the foes of myth and legend.

Fortune favors the brave in this video Slots game. It's no wonder that Age of the Gods™ is one of the most popular Slot games available at PokerStars Casino.

Spin your way to the summit of Mount Olympus and there at the apex you will meet Zeus, Medusa and innumerable other mythical figures who have battled the heroes of Grecian legend. This time, that hero is you – take on the role of countless brave explorers who came before you, with the goal not of honor and glory but a Progressive Jackpot prize that King Midas himself would envy.

Can you rise to the challenges of the Gods and try to score a big win? Read on through our Age of the Gods™ Slot review and find out how to start your quest

Age of the Gods™ Slot: Gameplay

The snarling face of the Gorgon Medusa, her head crowned with deadly snakes, guards the doors of an ancient temple. Once you're past her, though, the action begins immediately. 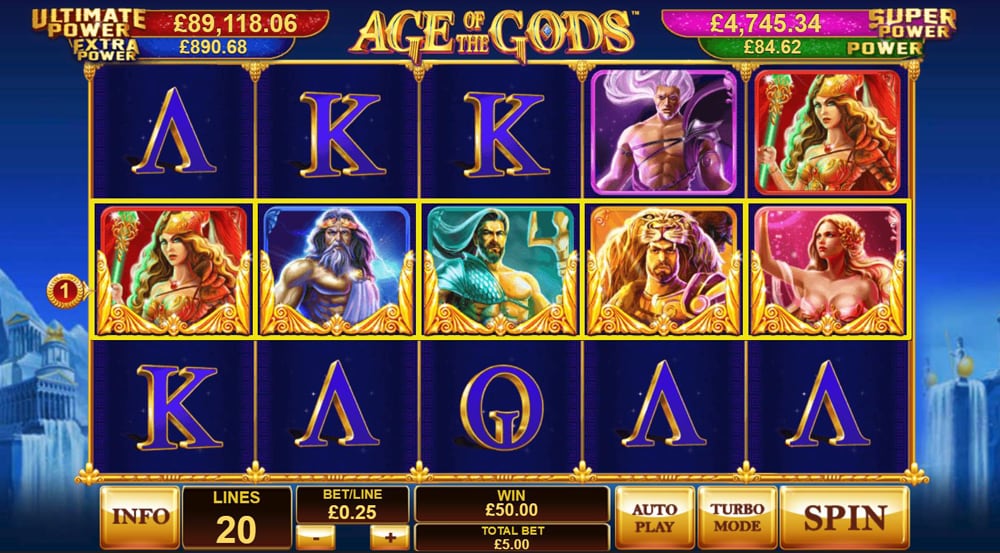 Age of the Gods™ is a five-reel, 20-payline Slot – but if you want to go beyond that and get a piece of that Progressive Jackpot then you'll have to contend with Zeus, Athena, Poseidon and Hercules first!

The large, intuitive controls and clear, distinct visuals mean that you always know what is going on in the game at any point – so you can clear your head and focus on your strategy, hoping to hit a bonus feature.

The main feature, of course, is the Age of the Gods™ Progressive Jackpot. This is unlocked when you land a sequence of three or more Gods symbols on the reels, and once you enter the Progressive Jackpot mini-game you're guaranteed a win.

In the game you'll be presented with 20 face-down coins, which you must turn over one at a time to reveal a symbol: Power, Extra Power, Super Power and Ultimate Power. Match three and that's the size of the jackpot you've won.

Even if you're not one of the chosen few destined to bag a Progressive Jackpot prize, there are plenty of other reasons to get excited about the riches and glory you may find on your Age of the Gods™ journey.

The Age of the Gods™ Free Games feature brings you face-to-face with the Gods themselves. Once triggered, you have to pick from a series of icons (similar to the Progressive Jackpot game) until you find three matching Zeus, Athena, Poseidon or Hercules symbols.

This will unlock one of four Free Games bonuses:

As the Age of the Gods™ Free Games feature you will receive is effectively random, this means that online Slots fans will be happy to make regular returns to this game. Each different bonus feature comes with unique perks and animations (like Poseidon firing lightning into the reels for extra wilds) which stops things from getting too boring.

On top of that, there is always the chance that you can take a trip to the Pantheon of Power. To journey there, you must land all five God symbols in any order on an active payline. This will trigger a bonus of up to 200x your line bet. 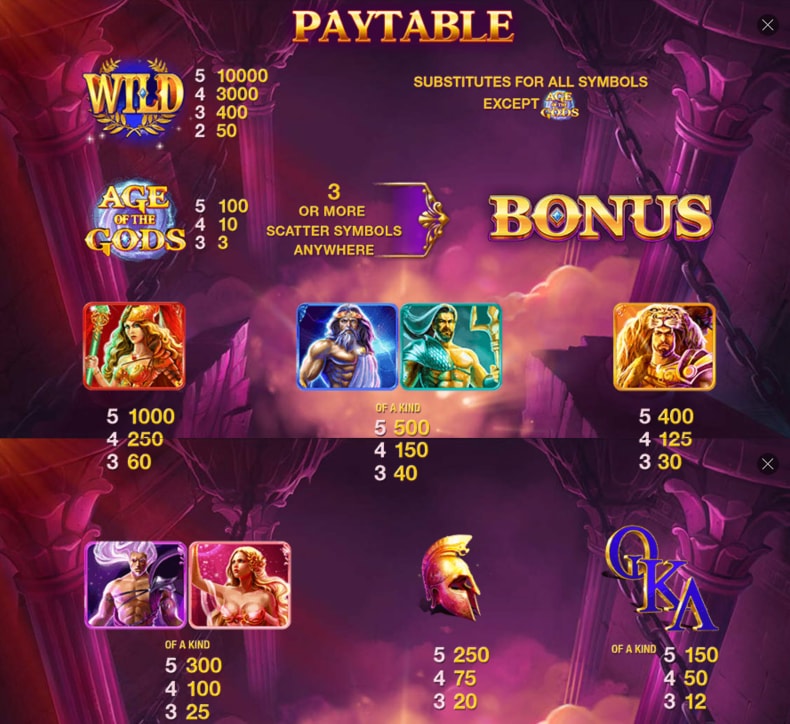 Overall Opinions: Who Should Play the Age of the Gods™ Slot Machine?

Age of the Gods™ at PokerStars Casino is, like the rolling hills and wine-dark seas of Ancient Greece, well worth exploring. Not only does it boast some of the best graphics and visual animations of any Progressive Jackpot Slot, but the numerous bonus features and multi-level jackpot rounds are sure to appeal to all fans of Slots games.

Don't worry, though – this game isn't just for history or theology buffs! While this game will definitely appeal to online Slots players with an interest in fantasy or action-adventure books and movies, as well as those with a passing interest in Classics, it's for everyone.

The game brings the medium of video Slots to life in a great way. The modern Casino player will love this game for its innovative play and multiple ways to score a big win.

Seed (sum at which the Progressive Jackpot begins):

Contribution rate (percentage of each bet funding the Progressive Jackpot): 0.99%

Win condition (how to win the Progressive Jackpot): Entering the jackpot game guarantees a win. Match 3 jackpot symbols of the corresponding Jackpot or wait for the timer to run out.

Win requirements (how to be eligible to win): Play a game linked to the Age of the Gods™ Progressive Jackpot.