This game is the key to unlocking a fantasy world based on the ancient Ireland of legend, a place where anything can happen – and usually does.

The eponymous Finn is a friendly, magical leprechaun who embodies not just a whole heap of cultural stereotypes but also a whole heap of online Slots fun in this exciting and unique game. Start your Slots adventure with him and he'll take you all the way to the end of the rainbow.

To add to the enchantment, throughout the course of the game you will find four bonus modes that are sure to have you dancing a happy jig!

Your journey begins with an ancient stone, but along the way you'll encounter a series of different mini-games and bonus features that will take you to all kinds of exciting and mystical locations – and at the end, perhaps you'll find a pot of gold?

Finn and the Swirly Spin: Gameplay

To say that this is not your typical online Slot is a pretty major understatement. Finn and the Swirly Spin rocks a unique gameplay mechanic that really makes it stand out from the crowd. Even veteran Slots players will be surprised. 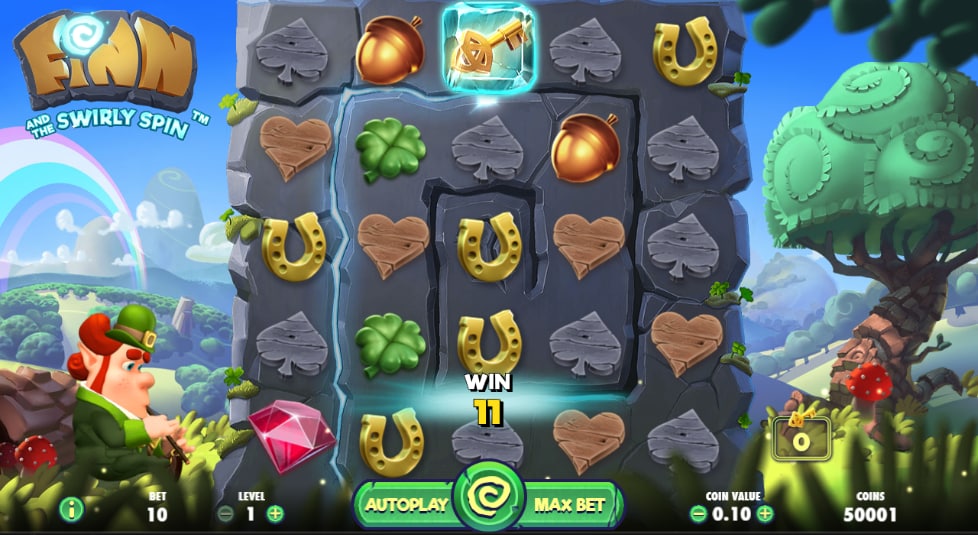 Finn is a friendly leprechaun, that's clear from the get-go. So what is a Swirly Spin? Well, it's a whole magic whirlpool of fun, and we think you'll like it.

The biggest difference (and the first one you'll notice as soon as you try the game) is that the symbols do not move through vertical or horizontal reels but instead follow a spiral pattern, starting on the left, moving clockwise and inwards to the center in a feature known as the spin mechanic.

This special gameplay is a huge part of what makes the Finn and the Swirly Spin Slot machine a captivating spectacle. The fantastic graphics of both the background and especially the caricatured, cartoon-style leprechaun who leads you through the game – not to mention the traditional Irish craic agus ceol – really build the magic of the game.

The symbols you will find swirling towards the center of the reels are all the symbols you expect from an Ireland-themed Slot: the famous lucky four-leaf clover, acorns, rubies, hearts, spades, scatters, and the shining star symbol, which is this game's wild.

Any winning line combinations vanish from the magical stone in a flash, allowing new symbols to swirl onto your screen and give you another chance to score a winning combination. This avalanche-style feature allows your consecutive wins with no limit.

Each symbol brings with it different possibilities to win up to 500 joins, but rubies are the biggest potential win. However, of all the symbols in the game, though, the key is… well, the key is key to your success!

Of course, the most obvious feature of this game is the spin mechanic which really differentiates Finn and the Swirly Spin from other Casino games.

You'll notice that at the beginning of every spin, a key symbol starts in the bottom-left position on the spiral. As you rack up wins via the Avalanche feature, it will move around the reels – when it lands in the centre of the spiral, you've unlocked a bonus feature!

Each time you do this, your key collection increases. The more keys you collect, the more free spins options you can choose. These bonus rounds are where the big prizes lie, and it's where the excitement of Finn and the Swirly Spin truly amps up:

One awesome slice of magic from this Slot is the ability to auto-save your progress. If you've collected twelve keys and you want to grab those Lucky Mug Free Spins, don't worry! You can exit the game and return (even weeks later) to find you will still have your twelve keys safe and sound.

You can win up to 500 coins for a line win in the base game playing Finn and the Swirly Spin, and the game has an average RTP of 96.61%. 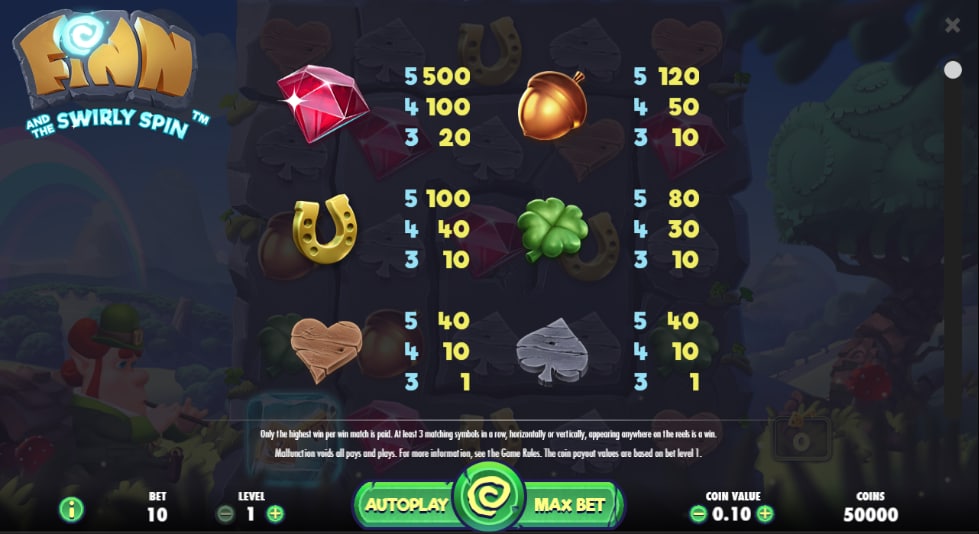 Overall Opinions: Who Should Play the Finn and the Swirly Spin Slot Machine?

Finn and the Swirly Spin is a great game for Casino players who want a change from the usual vertical reels and more conventional online Slots.

It's a nice break from the norm, because of its immersive graphics, entertaining gameplay, and constant ability to surprise.

As soon as you start playing this game, you'll notice what differentiates it from other Casino Slots games. Plus, it's designed to make you smile -- and occasionally to make you laugh.

That cheeky leprechaun isn't necessarily going to help you find the way to success in Finn and the Swirly Spin, but he will make it much more enjoyable to try!

His impish looks at the symbols, his gestures of encouragement, his grins in the direction of the player - it's a great graphical element that puts the game right at the vanguard of what you hope to find from a modern online Casino experience. Smooth animation, high-quality illustrations, and a spin mechanic that perfectly matches the game concept, rather than just seeming like a late add-on – what more could you want?

Well, bonus rounds, we guess! Fortunately, this Slot has them in spades. When you collect keys and that spin mechanic gives you win after win, you'll see why the game is so special – and with the ability to keep coming back and build up your progress, it's tough to get too bored.

There is enough volatility and variation in Finn and the Swirly Spin to make the magical Ireland depicted in the story well worth visiting. Then, the gameplay and laughs that ensue make it well worth staying there!